You are here: Home / Google launches 2nd phase of training for school students 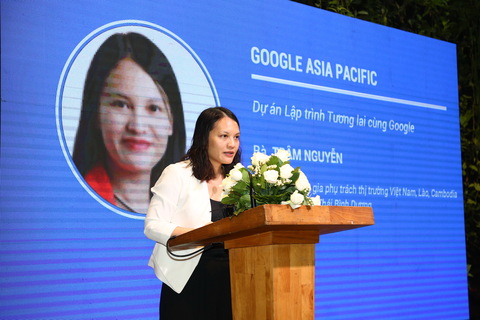 Tram Nguyen, country director for Viet Nam, Laos and Cambodia at Google Asia Pacific, introduces the Coding for the Future with Google project in HCM City on December 5. — VNS Photo

Google launched the second phase of the “Coding for the Future with Google” project on December 5 saying it seeks to equip Vietnamese students with coding and internet safety knowledge and efficient internet usage and develop their creative thinking.

The project, sponsored by Google and organized by the Dariu Foundation, will train 150,000 students at 300 schools in 15 provinces in 2019-20, 100 times the number it trained in the first phase last year.

Besides, 350 teachers will also be trained.

The second phase will involve content such as Scratch and Robotics logical coding, micro:bit application and online safety.

The first phase saw over 10,000 hours of Scratch programming training provided to 1,300 primary school students and 30 teachers at 10 public schools in HCM City and Vinh Long and Tien Giang provinces.

The World Economic Forum and LinkedIn have said in a report that work skills would change rapidly from now until 2022, with an estimated 85 per cent of jobs changed due to digital transformation.

The Google project is one of many by the company to support the training of future human resources in Viet Nam.

Through programming and internet knowledge courses, the project seeks to encourage schools to prepare future human resources for digitisation and industry 4.0.

Tram Nguyen, country director for Viet Nam, Laos and Cambodia at Google Asia Pacific, said: “We believe that knowledge and programming skills are increasingly important in creating the future and we are very happy to be able to expand this programming project to many provinces.” — VNS